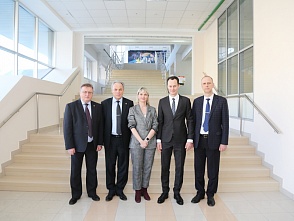 Deputy governor Vladimir Vyacheslavovich Shkarin and chairperson of the Committee of Economic Policy and Development of the Volgograd Region- Galina Victorovna Bykadorova attended the opening of the centre.

Temporarily in charge rector of the university –Alexander Valentinovich Navrotsky, academician of the RAS, university president-Ivan Alexandrovich Novakov and scientific supervisor –Vladimir Ilyich Lysak welcomed the guests of the University.

When we entered the Centre the first thing we noticed was that there were a lot of children, and that was not surprising. Another thing was remarkable: a rather big group of adults accompanied by several cameras and journalists. “Look, children don’t pay any attention to us”, - V.I. Lysak noted carefully. And it was so great as it was evident that children were so passionate about what they were doing that nobody and nothing could disturb them at that moment! Adults were receptive to this and tried not to distract young engineers much from their favorite occupation. And children had plenty of things to do. Judge for yourself: in the centre there are 9 helmets using which you can perform virtual surgery, assemble and disassemble a car, or using another neuroelectronic interface you can study the activity of the brain cortex! Today with unabashed pride the guests were shown 6 milling machines, lathe, laser beam machines, unique laboratory of virtual and neuro technologies , specialized software for work in the sphere of fast-turn prototyping and small volume manufacturing of the bio and neurotechnological systems. We can say for sure that all these helmets, consoles and other equipment look like pictures from the future! But in the centre there were not only starting investigators. Today their older colleagues have shown other inventions, in particular simulator for passive development of fine motor skills of fingers after injuries and brain attack “Rejoint” which is made individually for every person according to the size of a hand and fingers. Scientific supervisor of the flagship university has undoubtedly tested the simulator on his hand, but on the other hand that’s why he is a scientific supervisor- to experience first all the inventions.

Later on when an excursion around the Centre of project activity and exhibition of inventions of young scientists of the flagship university was organized for guests, V.V. Shkarin in the interview of our colleagues from the media laboratory noticed that opened Centre proves how important this activity is, how great it is that children from their young ages get a feel for science and he added that authorities, understanding the importance and necessity of creating such centres, will continue to do everything in order to develop and support in any possible way this direction.

At the exhibition of polytechnics’ scientific achievements guests could get acquainted with the project of adaptive wheel, which responds to any obstacle, climate control unit for cooling and heating bus driver's cab; one of the first in the world and unique in Russia 5-axis printer that creates durable products, and many other inventions.

It remains to recall that the implementation of the project of creation of the Centre “Bionics and Neurotechnology” on the basis of Volgograd State Technical University started in August 2018. The department “Computer-assisted and search design” of VSTU was at the forefront of this idea. This became possible due to the victory of the university in the competition organized by The Ministry of Economic Development and Trade of the Russian Federation.

The particularity of a new Centre is its orientation towards promising direction, connected with realization of bionic systems and neuroelectronic interfaces designed to control external devices with a help of generated patterns of brain activity. It is worth mentioning that one of the leading members of the department and an active participant of the project, scientific director of the Centre, Professor Alla Grigorievna Kravets has gained a large scientific and technical experience in this sphere.

It is notable that at the department “Computer-assisted and search design” this is not the first experience of such successful realization of innovative projects. In 2017 upon an initiative of the head of the department Maksim Vladimirovich Shcherbakov, who acquainted the guests with today opened youth creative and innovative centre “Bionics and Neurotechnologies” , has been created and is successfully functioning upon an initiative of candidate for a doctor's degree, PhD in Technical Sciences Anna Vladimirovna Matohina, youth creative and innovative centre “Laboratory of young designers”. Even then in 2017 on the opening of the Centre “Luxe” leadership of the flagship university emphasized that other projects were elaborating at the university, which were focused mainly on children’s innovative creativity, as the progress of the region was impossible without technical education, without the possibility to study from the young age how to create something with your own hands! A solid basis for further development of the education is created due to the link, existing between school, university and manufacture. 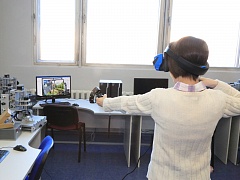 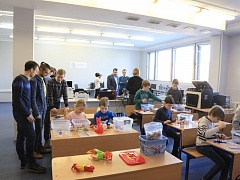 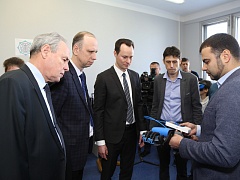 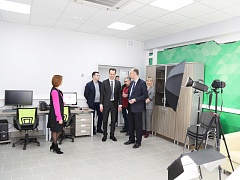 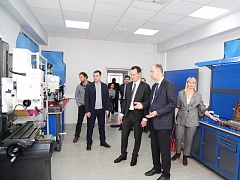 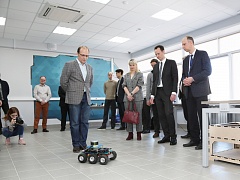