Support of innovations: the amount of grants for scientists in the Volgograd region has twofold increased according to the results of the year 2020 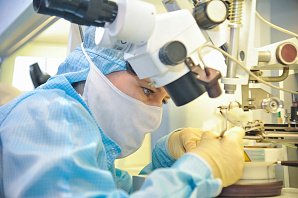 210 million rubles from federal and regional budgets were allocated for grant support of Volgograd scientists’ innovative projects. That is almost two times higher than the same index of 2019.

According to the information of the committee of economical policy and development the funds are allocated from regional and federal budgets within the framework of cooperation with the Foundation of innovation support.

We should also point out that the Volgograd region is traditionally included in the list of the leaders with other territorial subjects of Southern Federal District according to the amount of financing within the framework of its cooperation with a federal structure. If according to the results in 2019 the Foundation allocated about 59 million rubles for Volgograd scientists, this year small innovative companies received 165, 5 million rubles for implementation of their initiatives.

What is more, last year 60 scientific and research projects received grant support with total amount of 40 million rubles under the agreement between the administration of the Volgograd region and Russian foundation of fundamental researches. Ten research groups have received grants in the amount of 500 thousand rubles each for applied scientific researches, design and experimental elaborations in the sphere of medicine, import substitution and agriculture.