VSTU’s entering the list of the world’s top 1000 universities! The flagship university is for the fourth time in the Times Higher Education – World Universities Ranking 2021 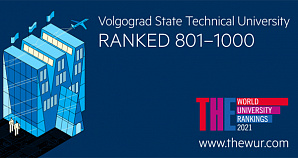 Volgograd State Technical University has substantially improved the performance indicators and is now in the group 801-1000 among the world universities. To compare: the last year we were in the group 1001+.

There are also 2 Russian universities in this group: Peoples' Friendship University of Russia (RUDN University) and Tomsk Polytechnic University.

This is a splendid victory and a further high achievement of the all VSTU team– the flagship university!

The ranking of the best world universities is a global research and accompanying it ranking of the best higher educational institutions of universal importance. The ranking is compiled annually according to the methodology of the British publication Times Higher Education (THE) involving Thomson Reuters team and is considered to be one of the most prestigious global university rankings. It was elaborated in 2010 and replaced popular ranking called World University Rankings. Nowadays rankings THE are integrated into government policy and strategic plans of educational institutions all over the world.

We should mention that different representatives of the prestigious worldwide ranking have already visited VSTU on numerous occasions. Thus, in April of the current year, addressing to the students and scientists of the flagship university, brand manager of the rating agency Lachin Italmazova (London, The UK) pointed out positive changes which took place at VSTU and wished these changes to be continued in the future. The fact that the only one regional flagship university is included in ranking Times Higher Education affects its recognition all over the world!