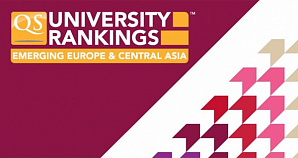 This Eurasian ranking became one of the most broad-scaled rankings of all time: QS has rated 568 universities, 374 universities were preliminary ranked and results of 350 best universities have been officially published.

Minister of science and higher education of the Russian Federation – Mikhail Kotukov commented on the results of the ranking: “We have ambitious goals in terms of the development of the export of educational services, which we can achieve, combining modern educational technologies, innovative approach, the best traditions of the Soviet school and international experience. Apart from the objective to increase the number of foreign students twofold in the next five years, the most important for us is a qualitative aspect – attraction of talented young people, their employment in Russia and rise in income from the export of educational services. We consider the export of education to be a full-fledged sphere of economic activity. With such high competition on the global educational market, which exists today, the search of unique educational niches and development of competitive products is not an easy task. It is a challenge for the country and each university. Due to the resources of the national projects “Education” and “Science” we have a possibility to apply differentiated approach working with different groups of foreign applicants, what is of utmost importance. Besides, we provide continuous professional development of teaching staff, development of university and city infrastructure. All this is an investment in the brand "Russian education", which in the coming years should retake its leadership in the most prestigious world rankings”.

According to the words of the regional director of QS in Eastern Europe and Central Asia – Zoya Zaitseva, a lot of Russian universities have improved their performance on the parameters “Reputation among employers” and “Academic Reputation” in comparison with the previous year. These two parameters have great importance for all QS rankings, from world-wide to the focused ones, - Zoya Zaitseva pointed out. Their growth means that Russian universities take our recommendations seriously.

Generally the universities are estimated according to ten criteria: apart from academic reputation and reputation among the employers, the proportion of teachers and students, number of publications for one employee, international scientific relations, influence of the university in the Internet, the percent of employees with PhD degree, citations, percent of foreign staff and students are also of utmost importance. Each criterion contributes to the overall assessment of the university.