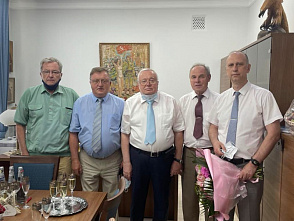 Member of the Russian Academy of Sciences, Doctor of Medical Sciences, Professor, Director of the Scientific Center for Innovative Medicines of VolgSMU, Chief clinical pharmacologist of the Ministry of Health of the Russian Federation, Head of the Department of Clinical Pharmacology and Intensive Care, President of VolgSMU - Vladimir Ivanovich Petrov celebrates his anniversary today.

The authorities of VSTU and VolgSMU are connected by a long-standing friendship, for several decades they have been united by professional and human relations. Therefore, today the hero of the anniversary received the most sincere congratulations from the heads of VSTU.

They told the president of VolgSMU that over these 70 years, Vladimir Ivanovich has already managed to do a lot, and there is no doubt that he will do a lot more useful, important and necessary for health of all mankind.

Vladimir Ivanovich Petrov headed the Volgograd State Medical University for more than 29 years. Under his leadership, more than 40 doctoral and more than 170 candidate dissertations were completed.