Polytech-TV is going to Samara for participating in the All-Russian Student Spring! 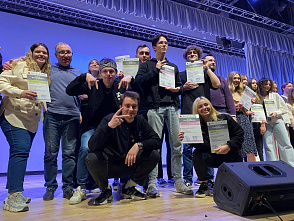 Volgograd State Technical University hosted a regional stage of “Student Spring on the Volga” on the 4,5,8 of April.

This event is one of the brightest and most creative festival, every student, having been there once, wants to go again! This year marks the 30th anniversary of this event. It is a great honor to take part in the anniversary of “Student Spring”. There are different competitions at this festival. It is held in 7 directions: vocal, choreography, theater, original genre, art, video, journalism.

According to the results of the competitive selection, the student television "Polytech-TV" received the following places.

Kirill and Anastasia, who took the first places, will go to Samara to participate in the next stage of the event. We wish good luck to our students from the student television studio "Polytech-TV"!