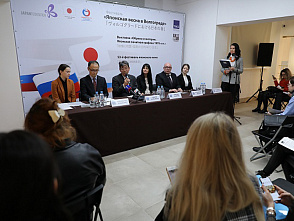 The festival “Japanese spring in Volgograd” launched a number of events in the sphere of politics, economics, culture, science and sports, which will be held in 2020 in the cities of Russia and Japan - the Volgograd Region again confirms its status of the center of public diplomacy. Minister of Japanese Embassy in Russia Tosio Yamamoto arrived to the region in order to participate in the events.

Within this visit there were held meetings with the representatives of the regional committees of economic policy and development, culture and sport, with rectors of the leading higher educational institutions on issues relating to the continuation of the development of partnership relations between the Volgograd region and prefectures of Japan.

We should add that yesterday vice-rector of VSTU Sergey Yurievich Kalashnikov presented at the meeting with the minister of Japanese Embassy in Russia.

We should point out that Volgograd State Technical university and Waseda university have been closely cooperating for many years. Japanese and Volgograd polymer workers have common scientific interests – invention of new polymers and materials. In 2016, the world-famous polymer worker, chemist, the head of the laboratory of the Faculty of Applied Chemistry at Waseda University, dean of the Higher School of Advanced Science and Technology, professor Hiroyuki Nishide , an eminent Japanese scientist visited Volgograd State Technical University sixth time in a row! President of the technical university, academician of the RAS Ivan Alexandrovich Novakov and by that time the first vice-rector of the university, professor Alexander Valentinovich Navrotskiy met the guests as old, good friends. That is because our polytechnics have visited Waseda university numerous times. I.A. Novakov gave there lectures and rector A.V. Navrotskiy undertook an internship at Waseda university in 2009.

In 2008 being a representative of the Russian delegation ex-rector of VSTU, the RAS academician Vladimir Ilyich Lusak participated with a report at the meeting of the XIII Russian-Japanese Commission on Scientific and Technical Cooperation in Tokyo. Then he shared the experience of interaction with the scientists of the university and Japanese colleagues. Vladimir Ilyich told that the researches for the synthesis of graft-polymers on the surface of different metals were being carried out under the guidance of RAS academician Ivan Novakov and professor Khiroyuki Nishide.

The materials are used in order to create organic current source and get superhydrophobic coatings with water-resistant and anti-freezing properties.

At the meeting they noticed that the launch of the common project on creation of methanol production at the territory of “Khimprom” in 2019 facilitated and contributed to the intensification of economic cooperation.

In the cultural sphere the exhibition “Images and substances. Japanese printed graphics of 1970”, which was opened at the Mashkov Museum of Fine Arts and festival of Japanese cinema, which took place at “Cinema Park Europa City Mall” became the brightest cultural events. 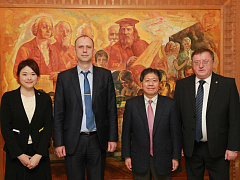 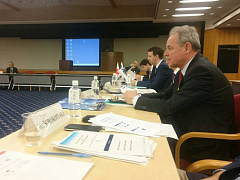