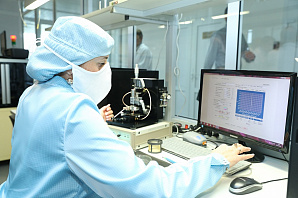 In 2019 more than 150 million rubles have been allocated for the support and implementation of the innovative projects, which are significant for the region, realization of the fundamental researches, which will facilitate the creation of new competitive industries as well as development of the innovation infrastructure. In comparison with 2018, funding allocations have increased by 30 million. All in all since 2014 about 700 million rubles have been allocated for these purposes.

The researches of the scientists of the Volgograd region gain wide regional and federal support. In 2019 the total amount of funding allocations was more than 150 million rubles. Over 6,2 million from this sum was targeted at funding the competitions in candidacy for a prize of the Volgograd region in the field of science and technology and providing state scientific grants. The works of scientists can be applied for the implementation of import substitution programmes, development of the agriculture, industry and improvement of health services.

Furthermore, 40 million rubles were allocated to support projects of fundamental scientific researches of Volgograd scientists – the competition was held by the regional administration in cooperation with the Russian Fundamental Research Fund under the terms and conditions of co-funding. 75 elaborations gained support in this direction. At the same time the average amount of grant grew more than by 53% .

Besides, the region continues to cooperate with Foundation of promotion of small enterprises in scientific and technical field – the total amount of grants is about 70 million rubles. The growth of funding allocations of the projects in this direction is 4,4%.

It is worth noting that in the Volgograd region the formation of the innovative structure was continued in 2019. In particular the first center of prototyping, which was included in the structure of the State Autonomous Agency “My business” was created in the region.

In 2020 system work, focused on the support of scientists, extension of the necessary infrastructure will be continued. We should note, that since 2014 about 700 million rubles have been allocated for scientific and technical development of the Volgograd region.