According to the order of the Ministry of Science and Higher education of the Russian Federation “On subsuming scientific organizations of higher education, which are subordinate to the Ministry, to the corresponding category” issued on December 26, 2019 N1423, Volgograd State Technical university has been included into the list of the first class higher educational institutions, which perform scientific, research, design, experimental and technical work of civilian designation, assigned to the corresponding category. Totally the list includes 32 Russian universities. Other 160 higher educational institutions of Russia were subsumed to the second and third category.

What influenced the fact that the flagship university of the Volgograd region has been subsumed to the first category? First of all it is due to a high publication activity of the teaching staff, including master’s degree students. In many ways it became possible thanks to the effective contract, according to which the scientists of the university got impressive commercial incentives for their articles in top-rated scientific periodicals. It is a great scope of science, which includes both budgetary and extrabudgetary resources. This is a close connection of the flagship university with partner enterprises of the region. All these and other factors have influenced the fact that VSTU has become among the first class higher educational institutions of Russia.

For expert analysis, the information, which shows the results of university scientific activity during the period of 2015 to 2017 academic years was submitted to the Ministry of science and higher education of the Russian Federation.

And these are activity areas of the university, determined by the Ministry of education and science of the Russian Federation, in which the scientists of the flagship university presented their scientific works: “Inorganic chemistry, chemistry of solids, material studies”, “Physical chemistry, chemical physics, polymers”, “Manufacturing and engineering technologies”, “Design and construction”, “Transport systems and technologies”, “Computer sciences, including information and telecommunication technologies, robotics”.

Including of VSTU into the list of the first class higher educational institutions and leading universities of the country is undoubtedly an expectable result of a hard work and another milestone event for the whole staff of the flagship university.

This is a real work of the scientists of the university, focused on the real sector of regional and country economy. This is another proof that the flagship university is a supporter of the Volgograd region. 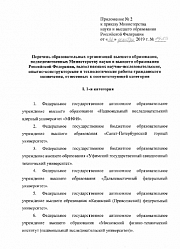 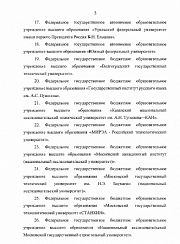