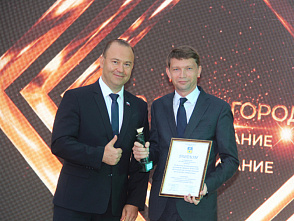 In satellite town all previous week was dedicated to the celebration of 65th anniversary of Volzhsky. Representatives of the flagship technical university and its branch: designate rector of VSTU A.V. Navrotskiy, director of VPI A.V. Fetisov, a honorary citizen of Volzhsky, professor V.F. Kablov took part in festive events.

One of such events was a solemn awarding ceremony for citizens of Volzhsky, who made their sizable contribution to the city development - a reward for outstanding achievements in various fields of activity: scientific, industrial, state, pedagogic, educational, medical, and others.

The chairman of the city Duma - Dmitriy Yastrebov presented a memorial sign “To the glory of the city of Volzhsky” in nomination “Education and pedagogy” to Volzhsky polytechnic institute (branch) of Volgograd State Technical University.

- I am sure that young citizens of Volzhsky will be worthy successors of the established working and educational traditions, - pointed out the head of the urban district Igor Voronin, former graduate student of technical university. 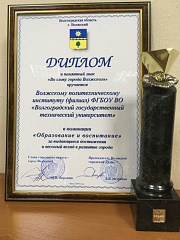