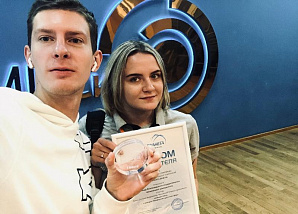 Two students from VSTU became winners of XII International Olympiad in the sphere of Information technologies «IT-Planet 2018/19». On October 8 they were on their way from Moscow to Volgograd and found a possibility to answer some questions.

We found out that an IT specialist Dmitriy Kukhno and an architect Marina Chesnokova won the first prize in a special nomination – “Unlimited abilities”. This nomination was exactly for the implementators of programs, dedicated to disabled people.

- Marina is a member of judicial staff of the Russian handball Federation. “Different people, including disabled ones visit our matches thus we thought that it will be great to equip the gyms with special systems” –the students told.

The students elaborated the project of a unique device which is put on your head or body and allows to coordinate a ball and a player in space. For this purpose the gadget will read data on head rotations and location of the ball.

- This elaboration will be able to help weak-eyed sportsmen and people with hearing disorders, - Dmitriy says.

The inventors tell that their elaboration has not only won the first prize in the nomination “Unlimited abilities” but in final they were well ahead of other participants. The project impressed the jury so much that one of the judges proposed students to become their consultants and help with a further elaboration of the idea.

As it turned out the idea to create special devices for people with special needs was not a random one. Head of the project, associate professor of VSTU Olga Melnikova gave some details.

- “I have been working on the issue of barrier-free environment for a long time and proposed it to the students. We have more than 20 elaborations in this sphere, though it was the second time when we worked with sport activities. There is something similar to what we propose, for example there exist special balls, but for variety of reasons such devices are difficult to work with. That is why we decided to adapt the environment itself”- the tutor says.

The collective has done a great job not only within the framework of its own field of concern, but also having involved different experts. The implementators talked to ophthalmologists, consulted the Blind Association. As the result of this work the students created the model of future device in miniature, which they represented at international scale.

-We had some variants and the work was carried out till the last moment. We made adjustments even on the road in train. Apart from the defense of the project the students had different master classes and activities in Skolkovo – the head of the project says.

The collective doesn’t reveal the scheme of the device and its appearance, but the students say that they are planning to apply for grant and realize the pilot project.