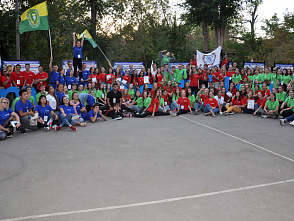 The youth forum “The fifth term”, organized by the committee of youth policy and tourism of Volgograd administration, in which participated more than 200 students from 11 universities of Volgograd (18 teams of 12 people), has been held for two days, on September 5 and 6 on the territory of children’s camp “Orlyonok”. The work of teams was organized on three directions: “Urban environment”, “Social medium”, “Art”. In nomination “Urban environment” VSTU was represented by two teams of designers, headed by its captain – Yana Kartavtseva and team of architects, leaded by Ekaterina Rubanova.

The program of the forum was full of different educational, sportive, cultural and entertaining events. Firstly, invited specialist from Moscow – an international coach, professor S.V. Teterskiy gave a lecture on development of teamwork skills. After it there was a stage of teambuilding in a form of a team all-around competition, which was held on 9 interactive playgrounds such as “Just dance”, “Floor ball”, “Jenga”, “Adventure park”, “The sun”, “Archery”, “Photo zone”, “Florist”, “Letter A”.

The governor of the Volgograd region A.I. Bocharov and representative of the Volgograd Duma V.V. Likhachev visited the events of the forum. They talked to the leaders of students’ teams and discussed issues, which worry the youth, including problem of employment, idea to create a youth center, prospects of reconstruction of Volgograd conservatory and a range of other topical questions.

The head of the department of town planning and architecture of Volgograd administration - main architect of the city E.Y. Petrov and member of the Russian Association of renovators, head of LLC NPO of architecture, town planning and design S.L. Sena organized a briefing for 6 teams, which are working in the field of “Urban environment”.

The teams got the task to formulate conceptual suggestions on complex improvement of upper terrace of central embankment of Volgograd from Komsomolskaya Street to Sedmaya Gvardeyskaya Street.

On the second day of the forum speakers addressed to the teams with detailed illustration of different aspects of the proposed projects and “loaded” students with necessary information. Chief executive officer of NRDN Dmitriy Selivokhin, head of the department of “Design of architectural environment” S.A. Matovnikov; director of The Central Park of culture and rest - P.L. Pigalev; regional manager of the center of social programs of the company RUSAL in Volgograd - Olga Kagarmanova; director of the farm of decorative plants “Flora Green” - Irina Murashova delivered a speech in the direction “Urban environment”.

Having got such vast and various information, the teams started to elaborate their own project proposals. After this there was a defense of prepared projects and according to its results two best projects were chosen.

Final presentation of the best projects from each direction was held within the framework of the closing ceremony of the forum, after what an authoritative jury named winning projects in different directions. As the result project of designers’ team from VSTU (captain Yana Kartavtseva) won the first place in nomination “Urban environment”.

Closing ceremony of the forum which was led by famous Russian actor Alexander Nosik ended with award of the winners. Students got a bunch of impressions, knew a lot of useful things, got acquainted with their peers from other universities, could demonstrate their creativity and in such an unusual way they celebrated the beginning of a new academic year. 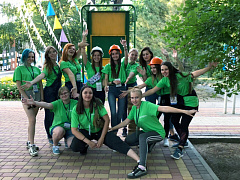 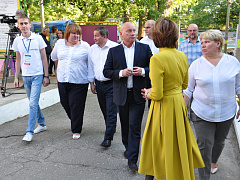 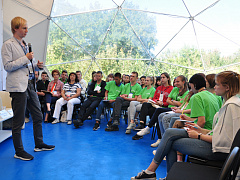 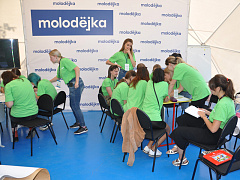 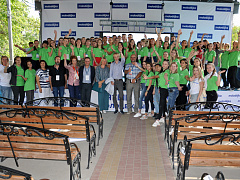 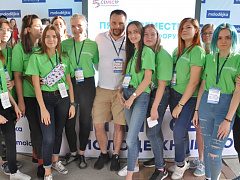 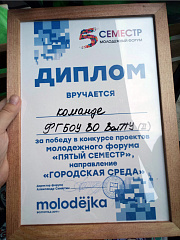