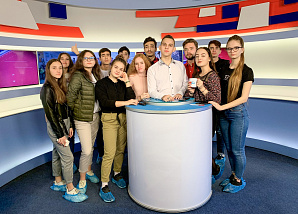 Students of Volgograd technical university took on the role of real journalists of the Volgograd news agency.

From now on Volgograd news will come out with the participation of students of technical university. You won’t see them, as they will be offscreen. More and more students become interested in the sphere of advertising and publicity move and they develop regional media industry.

On November 8 students of the department “Advertising and public relations” and employees of media laboratory of VSTU visited Volgograd news agency. The structure of the news agency includes  channel of municipal Volgograd TV (MTV) and publishing house “City news”. The participants of the meeting were lucky to make acquaintance and gain knowledge at once visiting all media outlets. General director Evgenii Knyazev personally talked with students, told about the departments of the agency and introduced them key employees. Evgenii Vyacheslavovich is a chairman of the city Public Chamber and he actively promotes the activities of the organization in the information space. As the head of the agency says: “It is necessary to understand which super-tasks media companies have and act innovatively.”

Volgograd television is interested in new creative personnel. A long-term immersion of the potential specialists into the work, with weekly practice at the studio, in the editorial office as well as at advertising and marketing department is being planned.

The meeting was useful as the participants plunged into the world of professional journalism and advertising. Straight after the excursion the students of Volgograd technical university were divided into several groups for the further work.

The first group stayed at the television studio with the legend of the Volgograd television Nikolay Korobov, who has worked his way from correspondent operator to the lead editor of the channel. Nikolay Nikolaevich shared his experience with the students and familiarized them with the professions of video operator and editor.

The second group of students went to the editorial office with Konstantin Karapetyan, who is the lead editor of the City news and with Natalya Chernaya - the head of advertising and marketing department of the agency. The secrets of the profession were revealed for enthusiastic students: employees spoke in details about the advertising business, and also taught master classes on typography and work with social networks as platforms for information dessimination.

A promising partnership of technical university and the news agency is no coincidence. The flagship technical university is included in top 10 universities of Russia of the national ranking of scientific efficiency in the sphere of economics and management in 2019. Bachelor degree students of the major of training “Advertising and public relations” graduate from the faculty of economics and management of VSTU. 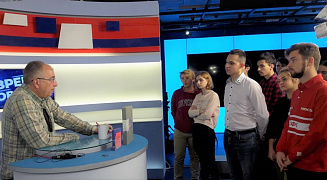 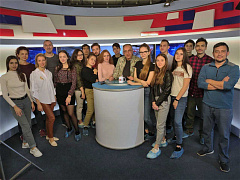