Staff of the flagship technical university has received unusual presents 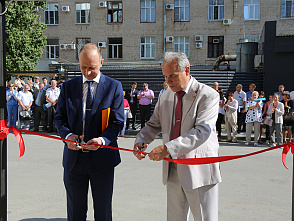 On Day of Knowledge the staff of the flagship technical university got unusual presents.

A Green corner of VSTU, located in front of the building of the faculty of motor transport, was opened last Friday.

It was difficult to recognize the ground itself – on a place, which had not been well-developed before, now there is a comfortable recreation area with young trees of different species, various benches and other interesting objects where you can not only have a rest, but also admire this splendor. By the way, it is not the only one green area on the territory of the university.

The rector of VSTU – Alexander Valentinovich Navrotskiy said in his welcoming speech: «For the last few years the city, where we live have been actively modernized, especially its center. And our university, which is situated on this territory, mustn’t fall behind in any case. So what you see now is the next step which was conceived last year”. The head of the university has also thanked designers of the project and all those who took part in the creation of this green corner.

Former rector of the university, now university research advisor Vladimir Ilyich Lysak told how the idea to create a recreation area was born and how it was realized.

The author of the project, a member of Russian Association of architects, honorable architect of Russia, head of the department of design, monumental and decorative art of Institute of architecture and civil engineering, professor S.A. Matovnikov shared some of his “secrets”. Among other things Sergey Alexandrovich told that Soviet and German weapons, which were left after harsh fightings of the Stalingrad battle, were found in this area during excavation procedures. Speaking about the project the author pointed out that it combines two aspects: scientific and creative, what allows to apply an asymmetric style, which corresponds to a modern trend. And Green corner of VSTU is integral to the one of priority projects, called“Comfortable urban environment”.

After the opening of the recreation area all the participants of the ceremony were invited to visit the lobby of the 2-nd floor of the high-rise building, where they found one more surprise – opening of a huge, full-wall painting “Infinity of studying”.

«This painting is pride not only of our university but of the whole city. When in the evening you pass by this building you can see illuminated painting through the windows” –Vladimir Ilyich Lysak said opening the event. After this he gave the floor to the authors and artists of the picturesque painting “Infinity of studying”.

The artists remembered their impressions when they first came to this place and it was here where they were inspired by the idea to create a monumental painting, told about the conception and about creative search of expressive means. By the authors’ words the basic concept of the painting is to show that science, technology and information are intimately connected with our knowledge of the Universe.

According to the idea of the organizers of this event, painting “Infinity of studying” may become a so-called symbol of our university, a significant place where students and university staff will come with great pleasure and will be proud to invite guests. 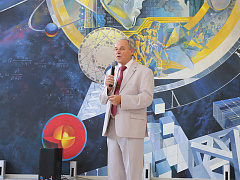 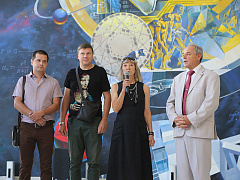 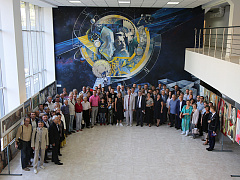 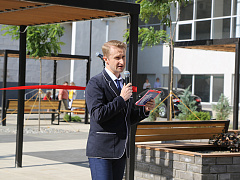 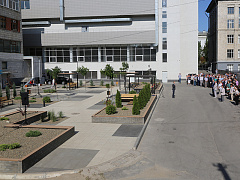 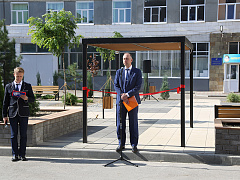 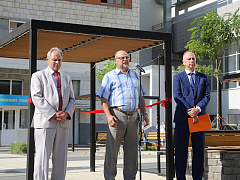 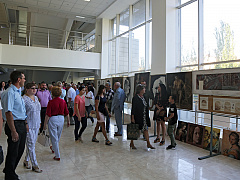 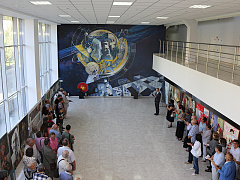