Once again VSTU has been included into the authoritative ranking of the universities of the countries with rapidly-developing economy (Emerging Economies University Rankings), presented by the British edition Times Higher Education (THE) 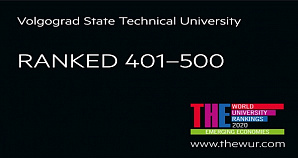 The edition Times Higher Education (THE) has published the ranking of the universities of the countries with rapidly-developing economy. 39 Russian universities have been included in Emerging Economies University Rankings, what is four times more than last year

As in 2019, Volgograd state flagship technical university is still the only one regional university which has maintained its rightful place ranging from 401 to 500

As the previous year from the flagship universities of our country only two universities – VSTU and Novosibirsk State Technical University have been included into the ranking.

Totally the ranking includes 533 universities from 48 countries. Tsinghua University in China has occupied the first place, while Peking and Zhejiang universities have closed the top three.

Emerging Economies University Rankings includes the countries, which are classified as developing ones according to the FTSE classification. The methodology of the ranking is based on 13 performance indicators, including teaching (teaching environment), researches (scope, income and reputation), citation (research impact), international cooperation (staff, students and researches), income from production activities (transfer of knowledge).