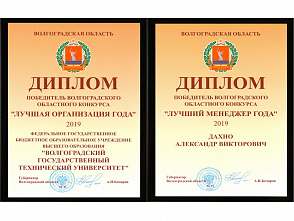 For the 10-th time Volgograd state technical university –a flagship regional university have become a winner among organizations, of the regional competition “The best managers and organizations” in nomination “Science”. Alexander Viktorovich Dakhno - director of Volzhsky scientific and technical complex (branch) of VSTU was considered to be the best manager of 2019 also in nomination “Science”.

For more than 20 years successfully developing regional enterprises have been being annually awarded in 19 nominations. Among them there are organizations of agro-industrial and energy complexes, building, transport and trading companies, enterprises of telecommunication and mass media. What is more, the competition is held among export enterprises, small and medium businesses. According to the results of 2019, 38 enterprises have been awarded the title “The best organization of the year”, 63 executives have become winners in nomination “The best manager of the year” including 20 leaders in sub-nomination “Young manager”.

The regional competition is held annually by the Volgograd administration in cooperation with Volgograd industrial and commercial board and Volgograd regional department of the Free economic society of Russia (VEO of Russia) and is focused on broadcast of the experience of successfully developing regional enterprises and organizations and encouragement of their leaders, who have achieved favourable results in the sphere of management. Besides it is a popularization of qualitative and effective management of organizations of all property forms in the Volgograd region.