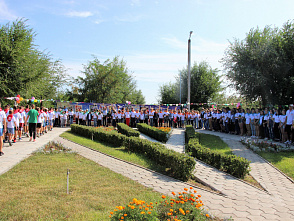 Scientific and educational festival dedicated to the environmental problems of water resources, development of ecotourism and alternative energy sources was held on August 12 within the framework of the expedition “Ecovolna” in children’s holiday camp “Chaika”, located in Svetloyarsky municipal district of the Volgograd region.

About 240 pupils from Volgograd and regional schools, who were in the camp “Chaika”, took part in this event.

At the gala assembly, dedicated to the opening ceremony of the festival, the head of the expedition “Ecovolna”, director of INPO (Independent non-profit organization) “National centre of engineering contests and competitions” Evgeniy Kazanov warmly expressed his gratitude to the staff of children’s holiday camp “Chaika” and to its director Margarita Rushanovna Trigolos for their open-armed welcome and emphasized that he was glad to see young citizens of the Volgograd region again within the framework of the big project “Ecovolna”.

Within the framework of an educational programme of the festival, members of The Federal Water Resources Agency represented by the deputy manager Evgeny Anatolyevich Lukyanenko and the leading engineer Svetlana Babicheva told young participants about technical solutions, operating mode and environmental problems connected with control of water disposal of Volga-Don ship canal as well as about particularities of the unique natural park of the Volga-Akhtuba bottom-land, its ecological problems and steps undertaken in order to preserve natural wonders.

One of the interesting educational activities within the festival was meeting of its participants with Elena Bakhtina - analyst of Disney Company, New York city and Polina Bakhtina – student of New York University, Steinhardt Scholl of Culture, Education, and Human Development, dedicated to the questions of education and self-education in the USA, so called «Lifelong learning».

Laying of the oak alley “Ecovolna” became a kind of a time capsule: young participants of the festival planted oaklets, having set up the beginning of a new wonderful tradition.

Volgograd Technical University and Volgograd Socio-Pedagogical University, represented by the associate professor of the department of social work Yulia Vitalyevna Borovitskaya, are intellectual partners of the science education festival.

Vice-dean of the Faculty of pre-university training of Volgograd State University - Andrey Viktorovich Isaev told the festival participants about a new, big, regional project “Midshipmen”. The educational program of this project is intended for 4 years and includes educational modules, which are aimed at support of engineering and technical creativity of schoolchildren. These are new laboratories of the faculty of pre-university training and educational modules, realized within educational programs of children’s maritime center, named in honor of N.A.Vilkov, which is situated in Voroshilovskiy district of Volgograd. This year since September Volgograd pupils of 5-6 grades will be invited to take part in this project.

At the festive awarding ceremony, the leader of Volgograd team “Midshipmen” got a Cup for the best result in intellectual activity”, which Volgograd schoolchildren won in Russian Solar regatta, which was held in late June in Kazan.

At the end of the expedition the flag of the camp “Chaika” was delivered on board of the pedal boat, which has already gone 1500 kilometers with the participants of the expedition and will return to the children of the next camp shifts in early autumn. 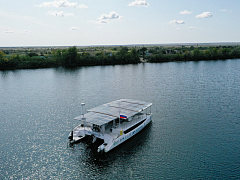 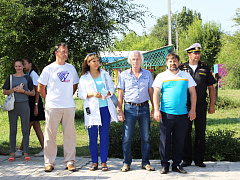 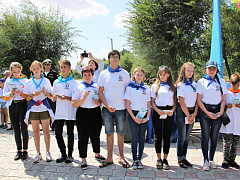 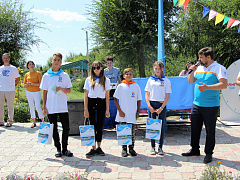 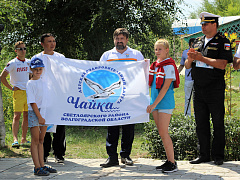 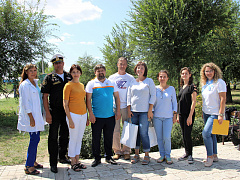