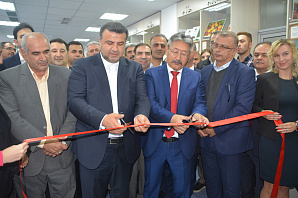 The opening of a new trading platform took place yesterday within the framework of the visit of the official delegation from Mazandaran province of the Islamic Republic of Iran, headed by the governor Akhmad Hosseinzadegan in our region. The trading house will become a place of a direct business communication of business representatives what will allow to increase volume of trade and tighten economic relations between the regions of the two counties. Public authorities and businessmen of the Volgograd region and Iranian province of Mazandaran participated in a solemn ceremony.

It is worth mentioning that representatives of Mazandaran province of the Islamic Rebublic of Iran have already visited Volgograd State Technical University. The flagship university and Mazandaran province are linked by long-term business and partnership relations.

The meeting of Iranian and Russian partners at technical university in May 2017 ended with the signature of a framework cooperation agreement between VSTU, Mazandaran province and two universities.

In August 2018 representative delegation from Volgograd, headed by the governor Andrey Ivanovich Bocharov made a working visit to Mazandaran province. It comprised the representatives of the regional administration, chambers of commerce and industry of Volgograd and Volzhsky, the business community, tourism industry, heads of Volgograd universities, among them at that time there was also the rector of the flagship Volgograd State Technical University V.I. Lysak.

During the visit, business meetings were held not only with the leadership of Mazandaran, but also with scientists and entrepreneurs of the province. V.I. Lysak participated in one these meetings, which represented a round table dedicated to the industrial, scientific and technical interaction of the two countries.

“In general everyone spoke about the development of cooperation between Mazandaran province and the Volgograd region in number of different areas of social and economic sphere”- Vladimir Ilyich told – “I focused my attention on the development of cooperation in the sphere of high-tech production, giving examples of unique inventions, made by the scientists of our university”.

That working trip showed that the governor’s idea to help business through personal example in order to create necessary conditions for further contacts not only proved its value but also showed that it is exemplary.

And today we see real benefits of the previous agreements and signed contracts.